Critical Thinking skills are among the most valued in the workplace and have been made even more pressing due to changes in global economics and technology leading to the advent of AI and automation. Machines can now do some jobs better than people ever could. But whilst computers can store and analyse data, humans are better at applying that information into creative solutions. This capacity for deeper thought and reasoning is how we can differentiate ourselves from machines and add greater value.

But what’s the difference between Critical Thinking and Critical Inquiry? Critical Inquiry goes beyond an individual’s capacity to exercise Critical Thinking. We define it is the ability to create a knowledge-focused environment through a culture of questioning, investigating, testing ideas and searching for insight in a culture of mutual support and empathy. It’s crucial to combine developing both skills and culture.

There are three interrelated areas where we focus our attention: 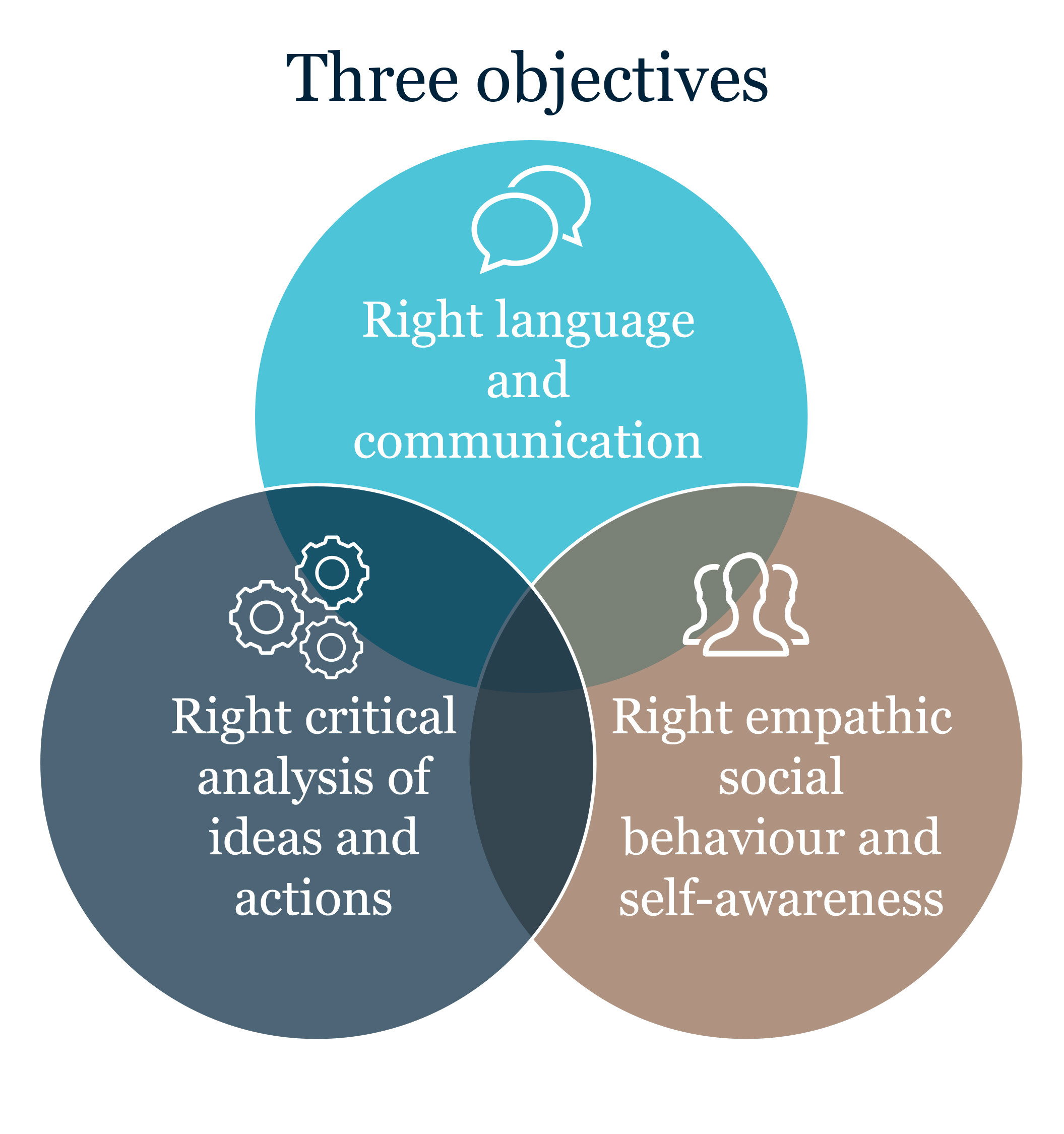 Critical Inquiry leads to numerous benefits, both for us as individuals and for the people around us. Our attention and observation skills are improved if we sharpen their use, leading to an improved focus on reality and less distraction by irrelevant ‘clutter’. When our Critical Inquiry skills are refined, it also gives us greater trust in those around us and more confidence in our own abilities. We are able to take on the unknown and to challenge action and ideas.

The benefits for our organisations are just as important. An increase in Critical Inquiry will make the businesses we work in less reactive and driven by problems. Decisions are more informed, and innovation is improved. There is a greater sense of shared purpose, identity and expectation about the way things work.

The design flaws in our amazing brains

The human brain. Home to one hundred billion neurons that make a million new synaptic connections every second we are alive. Home to every thought, memory, feeling, habit, skill, personality trait and experience that makes us who we are. And whilst our brains are capable of amazing things, they are also fundamentally flawed.

Our brains have evolved instinctive, intuitive cognitive shortcuts in order for us to survive. As hunter-gatherers, a rustle in distant undergrowth could have been a man-eating beast ready to pounce, so processing information quickly and jumping to a conclusion in that context was a necessary life-preserving measure. However, these powerful senses and cognitive biases can lead us astray when it comes to the kind of logical and reasoned thinking that we now need to solve complex problems in our rapidly changing world.

We have to be very careful about trusting our instincts. Our brains construct the world around us, but our perceptions aren’t always very reliable. As we’ve already discovered, our brains did not evolve to discover truth. We are not logical creatures; we are emotional ones. The tendencies of our minds, otherwise known as our cognitive biases, can create a barrier to clear thinking:

Learning to think well in an uncertain world

In contrast to our Neolithic ancestors, our dilemmas today are driven by more complexity, ambiguity and uncertainty than ever before. These are the hallmarks of working environments in many modern organisations. Complex problems (sometimes referred to as wicked problems) need different solutions, and different thinking to get to those solutions. The problem is that in some organisations, standard methods and practices are applied to problems across the board. An issue arises and out comes the playbook, with all the same approaches that worked before. The new problem is treated in much the same way as an old one, and it isn’t looked at with fresh eyes. That might be ok if the world stayed still, but in more complex, fast-moving industries where the only constant is change, these methods won’t help. What worked yesterday probably won’t work today.

People who can excel at Critical Inquiry are rational and curious, seeking out the truth of a situation or challenge rather than simply what’s on the surface. They are part scientist and part detective. They take an active stance to thought rather than passive, building cases around evidence-based arguments and logic. It’s all about thinking well, being open to ideas, considering diverse viewpoints, seeking clarity and accuracy, and reaching objective conclusions.

The important thing is that Critical Inquiry is accomplished while still maintaining good social relationships in a mutually supportive atmosphere. There is no point being able to ask insightful questions if we have not balanced this with empathy and care for the person we are communicating with. Being offensive or rude with our inquiry means we will not get the information we are looking for. In fact, it’s likely the person we are engaging will never work collaboratively with us again.

So, crucially, this approach demands that our thinking to be fair. This may be one of the most difficult elements of Critical Inquiry in which to engage. Not only the ability to control your own bias but manage the perception by others that you may be attacking their position when you are merely searching for the better path. We must ensure we are impartial and free of any self-interest, distorting biases or favouritism. Ask yourself:  Am I sympathetically representing the viewpoints of everyone concerned? Does a particular person or group have a vested interest?

When groupthink and overconfidence lead to disaster

From wishful thinking or dogmatic pride to outright negligence, failures in Critical Inquiry can be at best problematic and at worst disastrous.

Ask yourself what went wrong with the Titanic. If your answer is an iceberg you would be wrong. Human error was to blame. Even though it was an iceberg that would eventually cause the Titanic to sink, it wouldn’t have been an issue if all passengers and crew were safely on lifeboats. There were only 20 lifeboats on the ship, which could only hold roughly half of the passengers on board. The fallacy that the ship was ‘unsinkable’ was pervasive, it was the accepted opinion of everyone involved in her design and construction. Therefore, the removal of the lifeboats in order to improve the spaciousness of the promenade deck did not ring any alarm bells.

Assumptions also played their part in the tragedy. Captain Edward Smith was the commander of Titanic. In 1907, five years before the fateful voyage, he declared he had never been in an accident and he could not “imagine any condition which would cause a ship to founder. Modern shipbuilding has gone beyond that.” This overconfidence based on his experiences in the past was irrelevant as Titanic was twice the size of any ship he had ever been in charge of up to that point. He assumed that they would be able to spot and manoeuvre around any obstacles. Again, the misconception that the ship was unable to sink could have been the reason the captain ordered her to sail full steam ahead through waters known to contain ice, whilst not increasing the lookouts or reducing speed to be vigilant against icebergs.

In February 2003, the space shuttle Columbia exploded upon re-entering Earth’s atmosphere, killing all seven crew members on board. The independent investigation that followed found that the root cause of the disaster was not an engineering failure but endemic faulty decision-making at the heart of NASA’s culture.

The damage that would prove so tragic to Columbia was caused on lift-off when foam insulation had broken off and struck part of the shuttle’s wing causing a hole in the heat shield. NASA engineers were aware of what had happened and had requested satellite imagery to assess the damage. Due to complex bureaucracy, the requests were not given priority and were eventually cancelled by managers who dismissed the concerns. The mission management team acted as an ‘in-group’; rejecting dissenting opinions and failing to share information.

The pressure to keep the shuttle schedule on track led to consensus. There was evidence of ‘groupthink’ when harmony and is chosen over logic or wisdom, and authority reigns over expertise. This burden to conform and not seek out alternative courses of action resulted in bad decisions.

It was also clear that NASA saw Columbia’s mission as low priority and ‘routine’. Mission managers neglected to attend meetings that were supposed to take place daily. This was later highlighted as a fundamental failure by the Columbia investigation’s Chairman, Admiral Harold Gehman. He stated that NASA should never regard shuttle missions as “operational” but instead as “developmental”, treating each lift-off, orbit or re-entry as if it were the first.

We can see in both examples of the Titanic and Columbia that whilst there were weaknesses on the part of individuals, the cultural failings ultimately resulted in these tragic disasters.

It’s vital that we use Critical Inquiry in an age where we face complex problems and rapid change much more frequently. As we’ve seen, our brains favour the simple solution over those that are complex or ambiguous, but the world we now live in demands more than that. As individuals, we need to develop the skills to think clearly, analyse and gain insight, but it’s only part of the picture. It’s vital to also build a culture where the principles of questioning, experimentation, empathy and psychological safety thrive. Such environments will have clear purpose and nurture innovation, but crucially they will also avoid the kind of errors in thinking that can lead to systemic failures.

Critical Inquiry can only flourish through advancing both skills and culture.